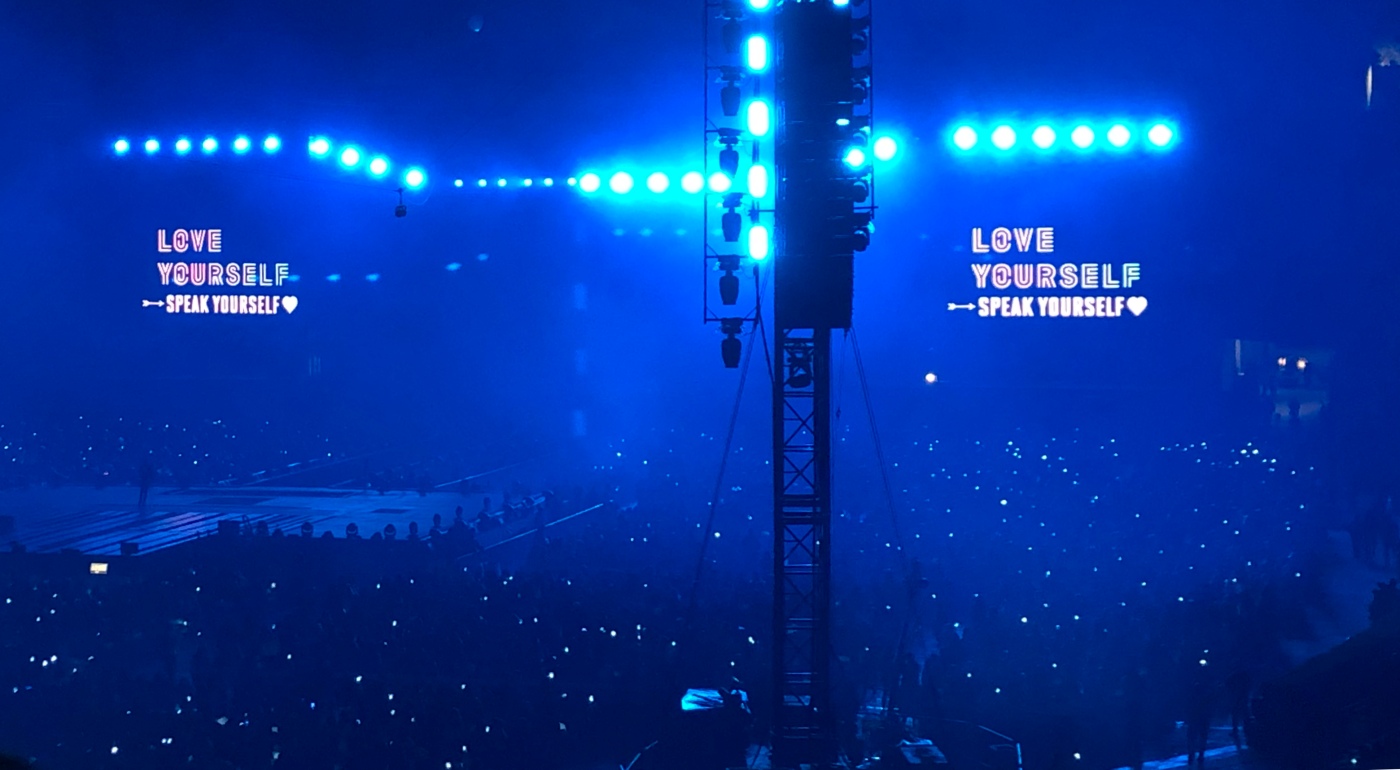 Welcome! Although I have previously written about games and psychology, I consider this my first blog post in a new series about the connections between my favorite topics: interactive media, positive psychology, and the pop artists BTS.

In May, I went to both nights of BTS’ Love Yourself: Speak Yourself tour at the Rose Bowl. At the second show, in his speech before the final song, Kim Namjoon declared that “tonight, we are one.” It was absolutely true. In that moment, I felt that he was speaking directly to me, in a far-off section among tens of thousands of other fans in the stadium, while also knowing he was speaking directly to all of us.

One week later, I attended commencement with my family and classmates and officially earned my master’s degree. And yet, none of the speakers made me feel as understood and recognized and valued as I’d felt at the concert. I was struck by the contrast. As a celebration, there is no comparison, but the difference goes beyond which was more fun to attend. Why did I derive so much more meaning among a highly diverse crowd of strangers than from a ceremony that is supposed to speak directly to my experiences from the past two years?

I’ve long been aware of ‘meaning in life’ as one pillar of broader psychological well-being. But I had never delved much into the meaning of meaning, and I wasn’t aware of many studies about it. In my mind, meaning was something that sort of “fell out” of experiencing other things that positive psychology researchers talked about, like relationships and striving for goals, the same way well-being could result from having or building those things. But even though meaning and well-being are very closely related, they are not the same thing. In recent years, researchers have elaborated on the concept of meaning in life and identified factors that specifically contribute to it, so I had some catching up to do.

I found a few accounts of a three-part model of meaning in life (Heintzelman & King, 2014; Martela & Steger, 2016; George & Park, 2017). Although the terminology can differ, the latest thinking is that there are three primary factors that contribute to a sense of meaning in life: purpose, coherence / cohesion, and mattering / significance.

The first component, purpose, is about having goals and a sense of direction for one’s efforts. Purpose is active and future-oriented. Some would say this is the motivational aspect of meaning in life (Martela & Steger, 2016). In addition to being one major factor in meaning, purpose in life is one of six dimensions in Ryff’s (2014) psychological well-being model.

A second component might be called either comprehension or coherence, but it refers to the same idea: that you are able to make sense of your life. This has to do with things like understanding one’s place in the world and feeling like there is some regularity or predictability in life—that things aren’t too chaotic, random, or unclear. Comprehension is the cognitive aspect of meaning in life (Martela & Steger, 2016).

A third component is called either significance or mattering. This might be considered the evaluative aspect of meaning in life (Martela & Steger, 2016). Mattering can basically be understood as exactly what it sounds like: when you feel that you matter, you feel that your existence, your voice, and your actions make a difference in the world.

I could talk about how I see purpose and comprehension at play in my experience as a BTS fan. But it’s this last dimension, mattering, that I am most keen to explore in depth. This is because I think it’s particularly unusual for a pop act, especially one with such a massive fandom, to create that feeling of mattering.

Elliot, Kao, and Grant’s (2004) perspective on mattering identifies three aspects: one that is solely cognitive (awareness; the opposite of being ignored) and two that describe the relational quality of mattering (importance to other people and that other people seek to rely on us to meet various needs). Prilleltensky (2014) proposes a simpler explanation, that there are two components to mattering: recognition and impact. Recognition is similar to awareness. Recognition comes from receiving information that acknowledges one’s presence and voice. Prilleltensky then describes impact as a sense of agency, or self-efficacy: feeling like your actions make a difference in your community.

There is a large body of research about self-efficacy, which is defined in psychology as a domain-specific belief in one’s ability to do something successfully. This belief can be built through learning experiences, either directly or vicariously via role models (Bandura, 1982). Self-efficacy is in itself relevant to well-being. For instance, it has some connection to the environmental mastery and personal growth components of psychological well-being (Ryff, 2014), where environmental mastery is “a sense of mastery and competence in managing the environment” (p. 12) and personal growth relates to learning and acquiring skills. Self-efficacy is also related to competence, one of the three basic psychological needs identified in self-determination theory, a theory of motivation and well-being (Ryan, Huta, & Deci, 2008).

Even without being able to respond to and interact with even a fraction of their fans individually, I believe BTS masterfully create moments of recognition and impact which contribute to an overall sense of mattering. A few contributing factors come to mind. They commit themselves to authenticity in their work and their communications. By honestly expressing things that many can relate to, it can make the listener feel understood and recognized. That’s not so unusual for music and the arts generally, but I suspect this experience is so widespread with BTS because authenticity is intentionally at the heart of everything they do; it’s a guiding principle, a core value. They are also known for acknowledging their fans at every opportunity; expressing gratitude is certainly a form of recognition that reflects back the impact their fans have had in supporting them and helping them reach achievements. They’ve fully embraced the idea that “teamwork makes the dream work,” a motto that emphasizes the significance of everyone in the community. BTS also have an underdog story; as popular as they are today, they had few supporters when they started out. They understand, through experience, how much every individual song or album purchase, vote for an award, or voice singing along can matter, and they impart that understanding to their fans.

Perhaps it seems like a non-sequitur, but when self-efficacy comes up, I can’t help but think of games. The feeling of self-efficacy is, in my mind, a fundamental psychological experience of game playing. No matter what type of game it is, you go from not knowing how to play to knowing basically how to play and then perhaps to mastery through repeated practice–that is the process of building self-efficacy for playing well. Games offer moments of recognition and impact in abundance. They are often designed for those moments. When we talk about any kind of feedback or even juiciness in games, these are all expressions of recognition of the player. It’s hard to talk about recognition separately from self-efficacy because feedback is necessary to build self-efficacy. This helps explain why games can be so satisfying: being an active player so obviously matters.

To me, it’s natural for curiosity sparked by BTS to lead back to psychology and interactive media design. Going to a concert doesn’t feel at all like playing a game, but I find more and more that the things I’m most interested in tend to connect in one way or another if I explore them enough.

Perhaps, after all of that, there is a simple explanation for why a BTS concert was a highly meaningful event for me. Just feeling like you belong in any community makes you feel like you matter (Lambert et al., 2013), and mattering is a primary source of meaning. That’s not even getting into the psychology of music or the powerful experience of singing and moving in synchrony with others. But I’m glad to have learned more about meaning and mattering in general, and I have a new perspective about how those feelings and beliefs operate in all the different parts of my life.

And it always feels good to remember those two nights at the Rose Bowl.

Prilleltensky, I. (2014). Meaning-making, mattering, and thriving in community psychology: From co-optation to amelioration and transformation. Psychosocial Intervention, 23, 151-154.