Last weekend at around 4:30 AM, I rolled over to turn off my alarm, already wide awake from excitement for a virtual concert by BTS called Bang Bang Con: The Live. I had slept in my “concert outfit” (merch t-shirt) and my ARMY Bomb lightstick was on my bedside table ready to go. Waking up at crazy hours for BTS is sort of a no-brainer for me at this point; in fact it all feels like part of the experience for ARMYs who live outside of Asia and Oceania. I tweeted to assure my ARMY friends I was awake.

BBCtL was a sort-of continuation of a series which began with “Bang Bang Con,” a weekend-long free airing of concert footage from BTS’ archive on YouTube. BBCtL was a leveled-up version of the Bang Bang Con concept: it was a live, ticketed (that is, paid) show with never-before-seen performances and even some simple interactivity.

One thing that had already been introduced with the original Bang Bang Con was lightstick synchronization. Lightsticks are a fixture of BTS concerts. Thanks to Bluetooth connectivity in recent years, the synchronization of colors and flashing patterns with a setlist (and, ideally, the fan’s seat location) have become part of the performance and the concert experience. Whereas the Bang Bang Con light patterns were the same quick-flashing rainbow for every song (which I found was still surprisingly effective at creating an exciting, concert-like vibe), this time the colors and patterns changed from song to song and were clearly meant to match each stage’s mood. Even such a small change felt like getting closer and closer to a real concert experience.

Multi-view cameras were meant to offer viewers some control over their experience, from wide group shots where you could see uninterrupted choreography to side-views and close ups to catch the little side interactions or facial expressions that might otherwise be easily missed. And there is, indeed, a fear of missing out involved with picking a single camera view. I watched most of the show with all six views displayed at once to try to mitigate my FOMO. Obviously, the trade-off is each view was smaller on my little laptop screen, and it was sometimes overwhelming. But honestly, even with those trade-offs, I loved the multi-view. The feeling of not knowing where to look, not sure if you’re missing some charismatic or funny moment, is very true to the experience of really being at a live concert with seven performers.

There were a few other aspects of the concert that were interactive or otherwise engaging beyond a passive viewing experience. There was a chatroom where viewers could post messages; at a couple of points in the show, the BTS members read some of these aloud. It was nice feedback for the audience to know the guys were receiving some of the love being sent out.

Also, by clicking on a lightstick icon in that chat area, viewers could virtually “cheer” for the group. Those cheers registered as glowing lights on a world map that gave a pretty good picture of just how big and widespread the audience was. I appreciated little details like the animated silhouettes of a cheering crowd at the lower border of this map, which added some movement to the graphic. It was a small reminder that all those points of light on a map are really people, all moving together at the same time, all experiencing the same moment.

Once the show began, though, those small reminders largely went away—at least for someone like me who didn’t want to keep a distracting chat window open during performances. That also meant I couldn’t access the button to virtually cheer in the moments I wanted to most: at the ends of songs.

This was perhaps the most heartbreaking aspect of the virtual concert. Although I was cheering loud enough to wake up my sister in the next room (sorry!), the only sound on set when a song ended was the BTS members’ heavy breathing. This was when the absence of cheering was most noticeable, but the lack of audience sounds was pervasive. No fanchants, no singing along, no call and response, no sighs or laughter or clapping as the guys shared their feelings or spoke to us casually in between songs. And as much as that absence affected my experience as a viewer, it surely pales to how that lack of feedback affects a performer. During speeches near the end of the show, Suga said “It’s so hard to dance…usually we get cheered on, so it was unfortunate we didn’t get to hear that”; RM also admitted “it was hard for me to perform”; and V mentioned, “We want to see your eyes, hear your voices, and feel your heat” (all real-time English translations from the official subtitles). Although there is a great deal of concert magic that can frankly never be replicated virtually, it should be possible to play sound from a live audience and even show some fans’ faces in real time to close some of those gaps. I would love to see such elements in future virtual shows, not only for the audience’s experience, but for the performers’ sake as well.

I also wonder if we will see more forms of “personalized” feedback in upcoming shows. During one song, for only a few seconds, I noticed a “Hi, Syd!” message in the corner of my screen. (Syd was the nickname I had provided to the platform ahead of time.) Although I liked the bit of feedback—it felt good to have even such a small moment of recognition—it didn’t seem related to what was going on in the performance. If we do get more personalized moments in the future, I would like to see them contextualized as part of the show.

I would also like to see more thought and creativity put into the ending. Endings are particularly important for our overall assessments of an experience (check out the psychological phenomenon called the peak-end rule), and very difficult to do well. There is probably not much to be done about the emotional drop-off when a performer leaves the stage and you’re not ready for a show to be over—especially if you’re left with the realization that you’re actually physically alone in your room. But little things about the designed experience could help soften that blow. BBCtL tried to do so with this ending graphic, featuring a somewhat awkward English translation of lyrics from Spring Day (it has been translated elsewhere as “I’ll come to meet you…please stay a while longer”). 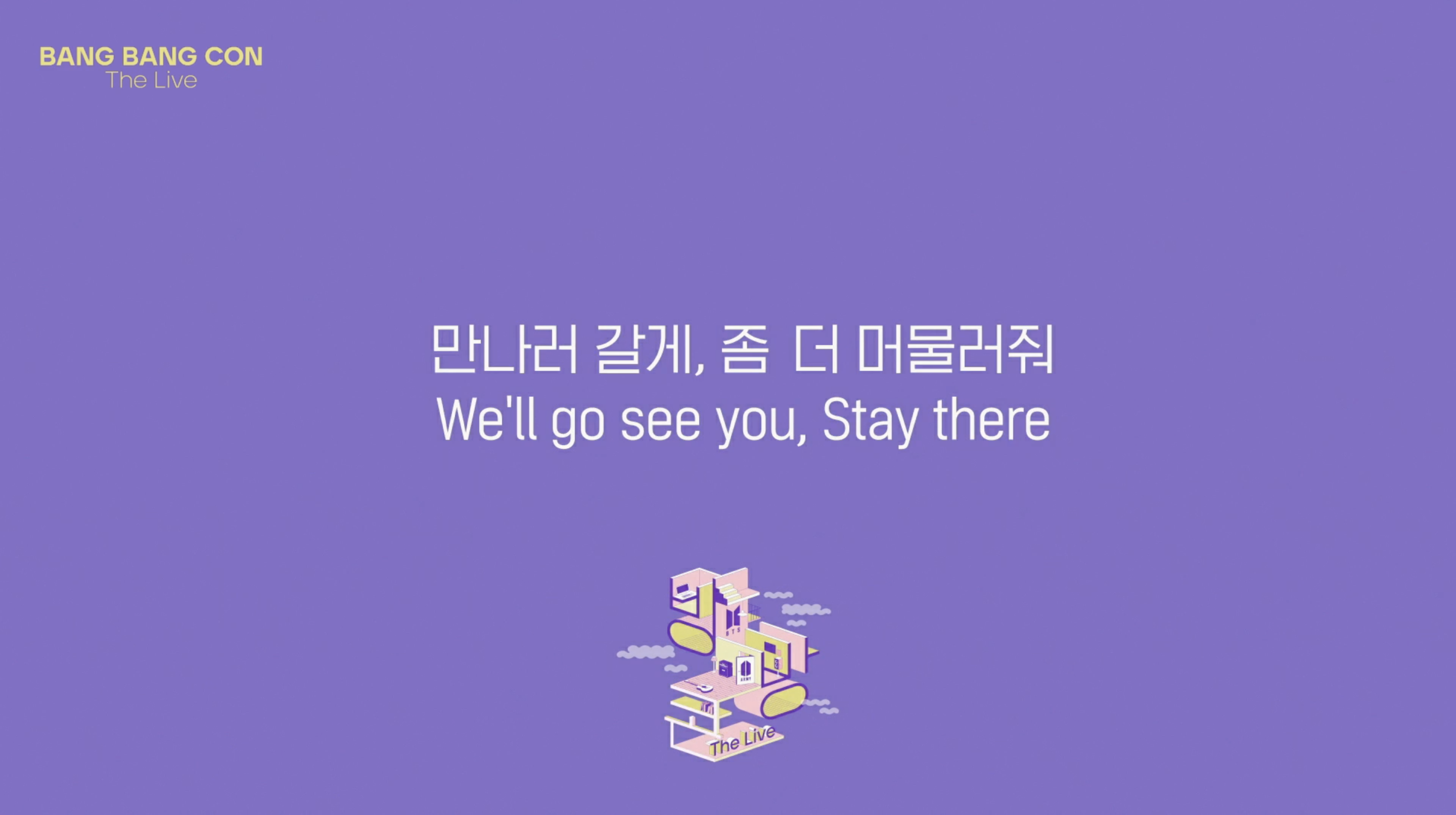 After a short while, even this was replaced with an unending black screen in the video player. Some ARMY took to Twitter up to hours later saying they still had the black video screen open, not quite knowing how to move on from BTS’ first virtual concert of this global pandemic era. That might seem overly dramatic to some, but I don’t think so. Especially for passionate and devoted music fans, a concert is an emotional peak experience; coming down from that peak can result in “post-concert depression” that might last days. The drop is not quite as steep with a virtual show, but the change is more abrupt. Staring at a black screen was the closest thing to lingering around the concert venue as it slowly empties out that we were afforded. This seems to me to be a missed opportunity. “I’ll come to meet you, please stay a while longer” is a comforting and hopeful message, but it’s not quite enough. What else could have been done to acknowledge the mixed emotions, to prompt social connections and bonding between fans, and to ease the transition back to a normal day?

Looking back at the BBCtL website a week later, I see another missed opportunity in considering the broader post-concert experience. The website seems to be the same as it was prior to the event, featuring promotional content and information as if it hasn’t even happened yet. In all likelihood, this will change in a few weeks when the replay becomes available and fans return to watch the video. But in the meantime, ARMY is still savoring and reflecting upon the concert, aided only by personal screenshots, illegally recorded clips, a couple dozen official photos, and a cute but fairly generic virtual ticket that was emailed to attendees. Yet the official website is totally unused. Even something as simple as cross-posting the photos to the website and allowing me to view or download my virtual ticket once logged in would help to signal that the event is over and we can appreciate the memory. Honestly, I find this to be a commonly lacking aspect of many live events: official sources provide so many great ways to “pre-savor” an event through anticipation (understandably, during promotions), but very few to savor after the fact through reminiscing (see Bryant, 2003*).

I would love to see the website as a whole transform into a place to reminisce beyond simply replaying a video. There is a culture of reflection among BTS and ARMYs (a notable example being 2019’s ARMYPEDIA project), so I think creating an online environment for reminiscing around particular events and collections of content would feel appropriate and harmonious with the overall fandom experience. But even if this does not occur for BBCtL, fans will always find their own ways to express their appreciation for an exciting and meaningful concert.